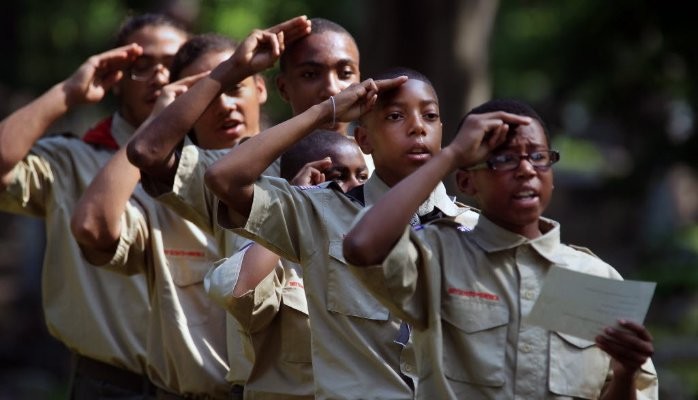 I got a whipping for wanting to be a Cub Scout. I got a whipping later because I know that I did something right, but to my mother, I disobeyed her. I stood there, repeating the Scout Law to myself as my mother hit me with my father's Army web belt over and over, intoning that "I won't lie to my parents."  It was the last whipping I received because soon afterward. She discovered that I was indeed telling her the factual truth and she promised that I would no longer get that kind of punishment again. I was 13 years old.

The Cub Scout whipping was because I would not stop talking about wanting to go down the four flights of steps and out the back of the apartment building to walk with a group of Cub Scouts and their Den Mother around the block. It was 1966, it was Chicago's south side, and my mother was trying like many Black parents, to keep their children in check and to prevent them from harm from others.  My father returned from Vietnam later that year, and we moved to Virginia for his schooling and then to Germany, where I did become a member of the Boy Scouts of America in late 1967.

I mention the two whippings not so you would feel sorry for me; or attempt to cast my parents -- both deceased now -- as child abusers. I mention this because today's African-American (Black) males have no concept of how special it was just to be * asked* to become a member of the Boy Scouts of America, let alone *participate* and be subjected to their standards.

Nor do their parents -- or other adults. Where are they? Can't they even *envision* the value of Scouting? My Mom did not realize the impact of a weekly meeting in which I would learn elements making up the Scouting "three and twelve" - and to apply them in my daily life.

BSA local Councils are really digging in deep to examine ways of reaching potentially two-thirds of America's youth -- the youth of color, diversity, ethnicities. I attended the Chief Seattle Council's annual Commissioner's Conference in which this topic got more than an "overview."

I lived, as I explained during their conference held north of Tacoma, Washington, this past weekend, in a bubble. As a "military brat" -- the son of an Army enlisted man -- I had an identity card which gained me access to the base's Commissary to purchase foodstuffs; to the base's Exchange, where I could purchase other household things. If I was truly hungry, I could show that same card to someone at one of the many dining facilities and eat lunch or dinner.  If I wanted to go to a movie, the bowling alley, the swimming pool, all I needed was that card and a couple of dollars to pay for whatever I consumed while there.

I had no idea what a "food stamp" was except that while buying food or gasoline off base, they came with your groceries; you took them home, licked and stuck them to a book, and several books would get you a blender with it.  Or, in my case a transistor AM/FM stereo radio. I would later learn those things as a college student—a different story.

Black youth outside of the military base where I lived and grew up was not part of Scouts at all. Their parents were never Scouts. Their grandparents were scared stiff of going out to the woods, whereby Klansmen -- or their sympathizers -- would be waiting to joke, harass, intimidate, and in many extreme cases, shoot, hang and/or dismember their bodies because they could. Because that was the environment that they lived within.

There is no "Follow Me, Boys" for Black youth.  The woods, the waters, and the outdoors were beautiful places with an invisible "do not enter" and "warning, death may occur" signs posted all around it which they read and heeded.  So there is no "outdoor linage" in many cases.

There WERE exceptions. In some communities, Scouting was segregated along racial and religious lines. In those cases, some Black men got a small taste of the "outing within Scouting" by being able to go to re-labeled summer camps with fewer services than their Anglo counterparts.  They wore the same uniforms but many of the patches were replaced with large rank pins, as the "patches were reserved for the white boys..." Eagle was extremely tough to earn because earning a merit badge frequently meant working with a white man isolated from others. Whatever the man said was what it took to earn the badge -- no "adding or subtracting from the established requirements as written" as it is today.

Eagle Scouts like Marion Berry, for one. Dr. James Sellars for another.  Roland Davis for yet another.  Our Scouting history books are full of African-American men who have reached beyond what they needed to earn the Boy Scout program's highest advancement award.

As those men grew up and had families of their own, it would make sense that in small pieces and over time, the number of African-American Scouts; and, in return, the number of Eagle Scouts from that population would increase. No, it did not.  As several of those men related, "Scouting didn't do anything for me - I barely got to do anything. Why should it do anything for my son?" So many males took to things which "did something."  There are stories explaining the loss of Black/African-American males and their potential as positive role models. You can find them. They are plentiful.

Some Moms and Grandmoms did step up, but their Scouting "lineage" is even less than the men. Grandma may have served as a Den Mother somewhere where "they let her," but that was the extent of that experience.  Our nation is full of grandmothers whose sole role in Scouting has been that of being a Den Mother (later to be called a "Den Leader") I attended a Council's Silver Beaver award presentation in which one of those longtime Den Mothers were being recognized for their service. Afterward, in the parking lot, I overheard a conversation talking about the fact that they gave the highest volunteer award at the local level to someone who only truly had *one job* from 1945 to 2004.

"How does she rate a Silver Beaver when there are Scoutmasters out there who have done jobs at the District and Council level for years and they haven't gotten one yet," said one man. The other man, pointing at me and the things on my shirt and said, "there's a man who should have gotten it..."

I smiled and answered the man, "well, it was all she could do to be a Den Mother for most of those years. The Scouts didn't let women do anything else until the 80s, and they said she was 88 years old...so everyone else figured that she was too old to be a Cubmaster or a trainer or something.  And no, I don't have one of those silver things either...I move around too much..."

(I did later receive that award...)

So, where ARE those Black adults today?  Are WE making an effort to reach and encourage them to give ALL youth (not just the darker-toned ones) the benefit of their life experiences and knowledge?  There are Black lawyers, businessmen, craftsmen, engineers, botanists, athletes, mechanics, scientists, chefs, artisans, and yeah, law enforcers - males and females, young and older -- out here.  They are here on LinkedIn.

Where are the parents who can and, with time, can help shape the African-American youth of today?  You can make a difference -- in a world different than those of our parents and grandparents.

Why did I stand there and take a whipping from my mother -- the last one at age 13?  Because after I was told to be home before the street lights came on earlier that day, I defended a young child from being bullied by older boys in the neighborhood. The street lights were just coming on when they started in with that kid. I learned in Scouting that sometimes one has to be brave, kind and loyal -- and to endure what happens when one holds up to those values. Witnesses -- other people -- told my mom after I've been whipped.  My mother came upstairs to my room. Tearfully told me what she found out and asked for my forgiveness.

It became the first of several revelations -- told by others -- to my mother about me. She found that her oldest son learned additional values above those taught by her and her mate, my Dad; above those taught in Sunday School and at the "Coffeehouse";  and those shared by peers. That is a value of Scouting, something I hope to pass forward to my children and to those I mentor through this wonderful program called Scouting.

Help me to find those adults. I know that they are out there.