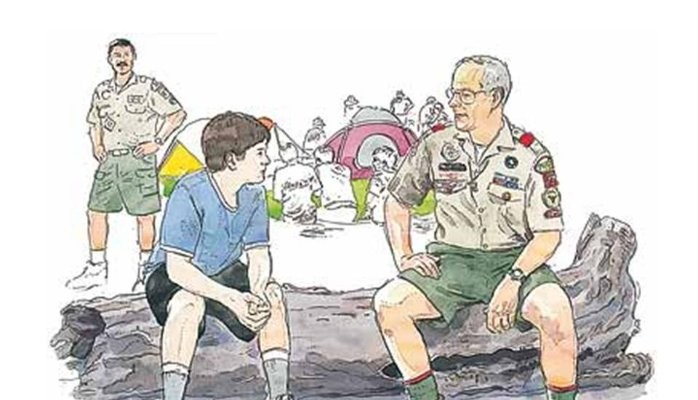 I guess it is the time of year in which good-intentioned parents desire to question each and everything and process that goes on within Scouting.  Personally, I have no problem with this -- it shows their interest in the program, and I hope the outcomes they desire for their son.

I have been on the road for the better part of three weeks and have not had a chance to fully review, let alone answer, much of the email sent to me.  I pride myself in responding within three days to inquiries left on my Yahoo(TM) or America Online(TM) email accounts (a lot faster on my "corporate" Air Force account *smiling*), but I clearly failed that goal in the past two weeks.  There were two frequent "strings" of questions, which I'm responding to here and with the next posting.

Twelve parents or Scouters, including those who did not leave a name -- just an email address -- asked the same question.  It was as if someone handed them a piece of paper and told them, "send this guy THIS QUESTION and see what HE says about it!"

"Can you please explain to me the importance of the Scout Master's conference and why I, as a parent, cannot sit with my child as he gets "graded" or "evaluated"?  Why do the Scouts insist that such meetings be done only between the Scout leader and the Scout?"

The Scoutmasters' (Mentors') Conference is NOT a "parent-teacher conference."  It is a discussion between the SCOUT and the SCOUTMASTER (or in extreme cases, with an Assistant Scoutmaster trained and appointed by the Scoutmaster to act in his or her stead).  It is a requirement for EACH Boy Scout or Varsity Scout rank (which is why I refer to it as a "Mentors' " Conference because, in Varsity Scouting, the conversation is between the Team Coach and the Varsity Scout; the BSA is catching on by refining their publications to talk about a "Unit Leaders' Conference" in general terms.

We are talking Boy Scouting, however, so I will use the "Scoutmaster (one word) Conference").

The purpose of the conference is two-fold: to prepare the Scout for the Board of Review for that particular rank and to allow the Scout to give the Scoutmaster feedback as to how things are going WITH HIM.  It's not a retesting period.

A Scoutmaster wrote to me and asked if "this was okay" as a "Scoutmasters' Conference"; he gives a piece of paper to each Scout in advance of his conference so that he and his parents know what is expected:

Listed here are the things that our Troop puts value in for the scout to learn. (Basic Scout skill listing)  So, use this as a study guide for your next Scoutmaster conference but, remember, use your Scout Book as the ultimate source of information. You should remember all the requirements for your rank and all previous ranks."

NO, this is NOT okay, and you need to STOP DOING THIS!  The Scoutmasters' Conference is NOT a "retest," "review," "pop quiz," or anything another term you want to use to explain that the Scoutmaster "puts a Scout in his paces" and ask him to tie knots, tell what the colors of the flag of our nation represent, give the Outdoor Code, explain what kinds of snakes are poisonous or not or explain or redo any other requirement toward a particular rank...  It's also not a grilling of "what to say and what not to say to the people during your Board of Review."

The Conference is nothing more than a quiet, BRIEF conversation between Scout and adult mentor as a check up on how the Scout is progressing in Scouting and if there's anything that the Troop can assist him with to make the progression work better or smoother.  It is a talk about the Scout's citizenship, character development, and fitness development.

The actual conference can take as little as ten and should not be more than 20 minutes in time duration.  Much of that, of course, depends upon the Scout doing the talking and the Scoutmaster doing the listening with occasional advice or information.

Mark Ray, a fellow Eagle Scout and book author, interviewed two Scoutmasters for a piece he did a few years back for the BSA's SCOUTING magazine.  One Scoutmaster's conversation with Mark stood out to me...it is what I did as a Scoutmaster as well:

"As the Scoutmaster of a 100-member troop, Larry Ashbacher of El Cajon, Calif., has plenty of tasks on his to-do list. But he knows which job is the most crucial: the Scoutmaster conference.

"It's the most important thing I do," he says. That's why Ashbacher handles almost every Scoutmaster conference in Troop 362 himself.  Although the Scoutmaster conference is part of the advancement process, Ashbacher also holds informal conferences with Scouts, who are not advancing.  If a Scout doesn't reach First Class within two years, for example, Ashbacher will pull him aside for a chat. He'll do the same thing if he hears the Scout is having trouble in the troop or at home.

When parents ask to "sit-in" on their son's conference, I politely tell them, "no, you're not allowed to be a part of the review."  When they ask "why not," I inform them that this is the one time I get to sit with their son, and he gets my undivided attention while he gets to share with me how he honestly feel how things are going in the Troop, things I can help the leadership do better and things we can do without.  Having parents -- or any other adult or Scout present for that matter -- would interfere with his ability to speak his mind honestly and forthrightly.

"But," some parents tell me, "we're allowed to observe EVERYTHING...it's in the Scouting manuals and stuff..." which is absolutely true.  For those parents, I set up two chairs a distance away from where their son and I are talking, and they can observe to their hearts' content.  The policy is OBSERVE -- not "interfere" nor "interject" into "what their son was actually saying" to me.   Your son is capable of expressing his own thoughts and emotions to me or to anyone else around.

If they press, I simply inform them that "this is part of the requirements for his advancement to (whatever rank). I am the only person who can do this part of the advancement.  I do it in a space whereby you or others can clearly see the two of us talk, so there's no hanky-panky going on.  At least one other adult looks on (see illustration above) during our discussion.   But it's a requirement, and if you continue to want to "cut in," you're welcome to do so; it just won't count as a Scoutmasters' Conference. Okay?"

Hate to be such a snot sometimes, but that's the way the BSA designed that part of the advancement step; again, it is NOT a "parent-teacher conference."

It is a Scoutmasters' (Mentors') Conference.