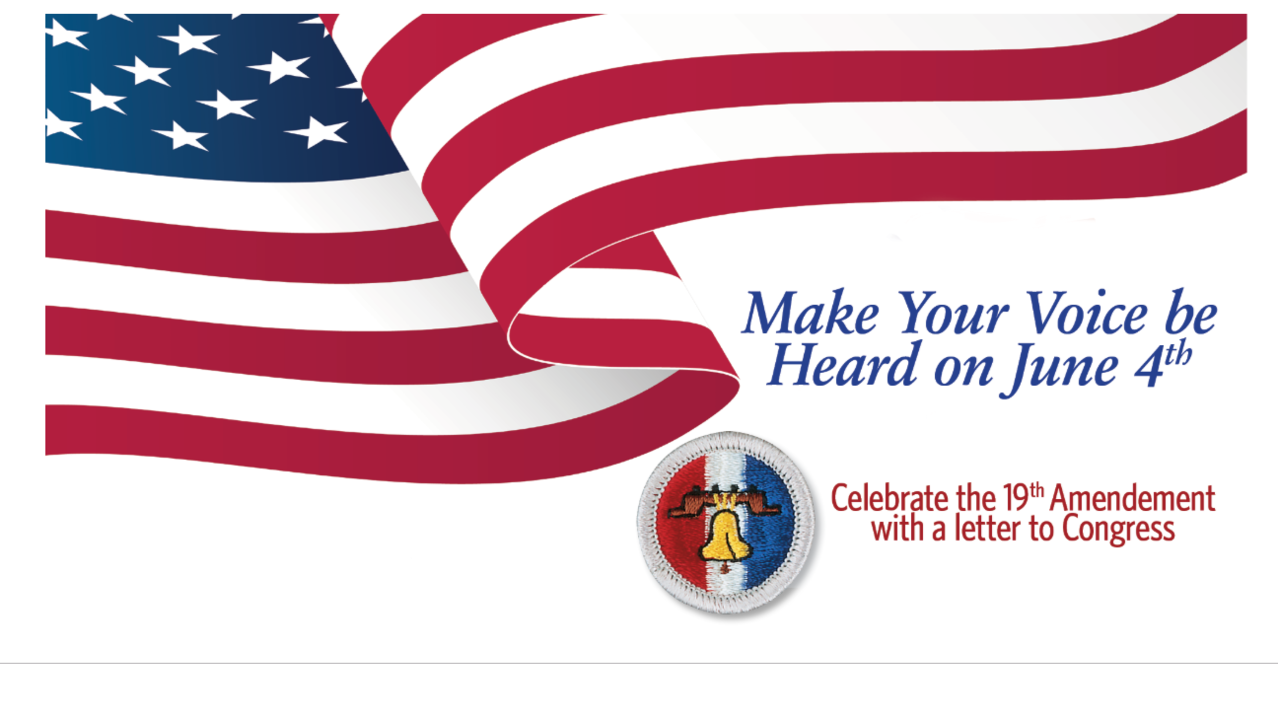 June 4th marks the 100th anniversary of Congress passing the 19th Amendment, which gave women the right to vote. This was a historic moment and an important step that empowered all citizens’ voices to be heard.

Civic duty is core to Scouting and foundational to Scouts BSA, which in 2019, one hundred years later, celebrates its own milestone in welcoming all youth to this life-changing program. Some of our newest troops even saw a direct parallel and told us they paid homage to the 19th Amendment by designating themselves Troop 19.

To commemorate the 19th Amendment in this important year for Scouting, we invite all Scouts BSA members – boys and girls – to write a letter to Congress about a national issue that is important to them.

This act of civic engagement is a fitting tribute to a ground-breaking moment that enabled more voices to be heard and serves as an example of Scouting’s commitment to participatory citizenship. In fact, writing a letter to Congress fulfills part of a requirement for the Citizenship in the Nation merit badge, which was established nearly 70 years ago and is one of the thirteen required merit badges for Scouts seeking to earn the Eagle Scout rank.

While the 19th Amendment was not ratified until 1920, the passage by Congress in 1919 in itself should be celebrated as it paved the way for all citizens to participate in the democratic process in our country. In 2019, our country is stronger because more voices can be heard, just as our organization becomes stronger when we welcome a new generation of trailblazers into our programs and our movement.

Scouts who wish to participate in this commemoration activity must email their letters to one of their Congressional representatives on June 4th and copy Scout.Communications@Scouting.org so the letter can be counted in our national tally and potentially highlighted in the media. We will not make any letters public without first gaining permission from the Scout’s family.

We encourage you to support this call-to-action by spreading the word to the Scouts in your troop, community, district, and council."

The U.S. Scouting Service Project, Inc. (USSSP) supports this effort to allow and keep our Scouts civic-minded, as responsible citizenship is one of the BSA's four aims! (Leadership development was added as an aim two years ago.)