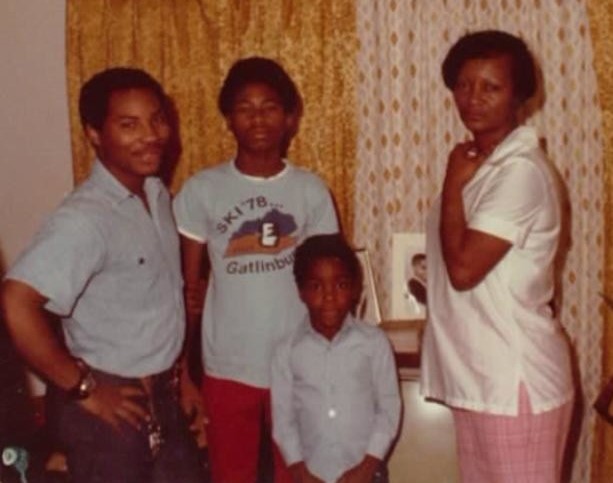 My mother -- and those others I consider "Mom" -- are all visiting each other in Heaven. I have no doubt about it. That's what Moms do -- they spend more time going around, talking their children up and not saying much about themselves. When they were alive on this Earth, they would spend more time talking about the ailments they -- or others -- suffer from and asking for prayers and good thoughts as to the resolution of pain or illness. In Heaven (I have been told), there are no such things as ailments or pain -- so they would have to spend time talking about, well, their kids.

When they were all alive, I got to know and spend time with my Mom and Grandmother as well as other families' mothers. I learned and observed from the things I've tried to apply to my own family.

On the morning of Tax Day back in the late 90s, my mother looked at me and waved before she took her final breaths from a hospital bed in Elizabethtown, Kentucky. She had lung cancer and in the early 90s, had a part of her right lung removed. She was later enduring much pain before admitting herself into the hospital three weeks before she "crossed over" as a result of the return to cancer which went to both lungs. Her smoking did not help things...she never stopped. My mother did not tell anyone -- not even her husband and children -- what the doctors were telling her for two months prior: you are going to die soon and you need to be in someone's care. "I am," my Mom wrote because she had a tube down her throat to assist her breathing, "I'm in God's care." She did not want but received a lot of love and support from her many friends and relatives visiting over the three weeks...all of who stated that "we had no idea she was this ill...she was just herself all of that time..." I would just nod in agreement.

I was blessed to not only know but spent a lot of "quality time" with my Grandmother Laura Brown (my oldest child was named for her). We called her "Big Mom" not because of her size (she was a short skinny woman) but because of her prominence as the major influencer in our family. My Dad did not know who his mother was, so my brothers and I only had one grandmother we knew of. Those of you who observe me talking back to my television set -- and not just during sporting events -- would be relieved that it was NOT because of some brain-impairment (shush now!! *hehehehee*) I have but rather from years I spent with my Grandmother talking back to the "talking heads" appearing on those Sunday morning or Saturday evening "public affairs shows"; whispering to each other as the golfers and bowlers would perform; and yelling to "Power Drive him!!", "Get him on the ropes!!" or "You're gonna get your butt beat!" to various performers on late night or early morning wrestling shows.

As if they could actually HEAR US. I miss my "Big Mom" especially at times like Mother's Day.

There was Elsie Vires, the mother of my first former wife, Millie. Her red hair, gentle but firm manner, and her coffee kept me coming back even when there were doubts that her oldest daughter would give me the honor of being her husband. Elsie would wink at me during the morning breakfast and tell me that I should get "that gal of yours to fix you some food...". Elsie is planted alongside her husband along a ridge near their former home in Lee County (outside of Beattyville), Kentucky. They wanted to be buried where they have lived for decades, raising their three beautiful girls. I genuinely miss her meals, but I am grateful that her daughter learned well from her...and that her children learned the basics in life and living from their Mom.

Before Elsie and after she passed away, there was Rosa Abner. "Mama Rosa" did more than encourage me to spend more time with her eldest daughter Carmen Leah. She taught me valuable lessons on how people living in Appalachia survived and thrived for decades. Those lessons I applied while I was working for the BSA as a Paraprofessional while going to college. She reminded me while teaching and sharing those lessons that "your Momma gave you a lot of knowledge on how to deal with people...I am teaching you how to have a bit of humanity when using that knowledge..." It was a series of social, spiritual, and emotional lessons which to this day still keeps me going when times are rough and tough. I wrote in a couple of books how her coaching and butt-kicking got me to organize several Scouting units -- some which are still running -- in an area of our nation which doesn't always get successes. Rosa was the closest thing to a second mother, and when I assisted in honoring her passing, in my mind, I could hear her telling me "relax and enjoy your life."

There was "Momma Ryan" -- Ann Ryan, Jessica's mother. Not only did we constantly "gang up on" her only daughter teasingly, but she entertained and enlightened me at the same time -- starting from the time I was introduced to in her almost spotless kitchen to shortly after I returned from deployment during Operations Desert Shield/Storm. I spent that entire Saturday going to from yard sale to yard sale looking for Jessi -- and finally found her helping her mom at their home on Kentucky Street in Paris (Bourbon County for my fellow Kentuckians). If there was a woman, I fell in love with quickly; it was "Momma Ryan." Her charm and quickness kept me off-guard but also endeared me to her. It was a great influencer when Jessi and I talked about having her to live with us when things got tough for her in Paris. She was Jessi's "partner in crime" while I was overseas during several overseas deployments and after my return when we started down the path toward having or adopting children. I cannot hear a Gaither Family tune without reflecting on that woman who would sing or hum along with them over the airways.

If there was a way to send flowers and cards -- FTD and Hallmark, you really have to work on this -- to them on this Mothers' Day, I would do so without hesitation. While all of you are sitting or standing around looking down on your families, I for one constantly look upward to all of you in thanks. My mother gave birth to me, the first of three boys; but she and those other Moms (and a Grandmother) also gave me love, acceptance, a listening ear, understanding, and a swift kick or tapping (Momma Ryan had a cane! My "Big Mom" used whatever she could reach to from her bed or wheelchair!) when I deserved it.

Happy Mothers' Day to all of you...I love you all! I miss you all also!!