In eastern Kentucky, 18 miles of the planned 36-mile Dawkins Line Rail Trail is open for use. Although only half-finished, the trail has already become the state's longest rail-trail. The trail's first phase from Hagerhill to Royalton in rural Johnson and Magoffin Counties opened in June 2013. The rail-trail will accommodate hikers, horseback riders and cyclists. This 18-mile-long trail is a great little gem in the mountains of eastern Kentucky. This trail is in a beautiful and remote area, it’s very peaceful and quiet, and it is in pristine condition. The trail surface is finely crushed gravel, so most cyclists will probably want to ride their mountain bikes.  Any tire over 1.5 inches diameter would probably be OK, but thin road bike tires will sink into the gravel.  Bikes with front suspension are also recommended, as this trail has some sections with a mild washboard surface.  The trail is open to hikers, cyclists and horseback riders, but closed to motorized vehicles including four-wheelers, ATVs, motorbikes, etc.

Lots of bridges and trestles

The trail has a number of nice trestles and bridges and the first one is only about 6 miles down the road if you are a beginner and want someone to pick you up at that spot... This 18-mile trail features 24 trestles and the Gun Creek Tunnel (pictured above), which is 662 feet long. The rail-trail also passes several historical coal structures which still stand in this area, even though coal is no longer mined here. Park Rangers regularly patrol this trail and are available for questions or any help that you might need. 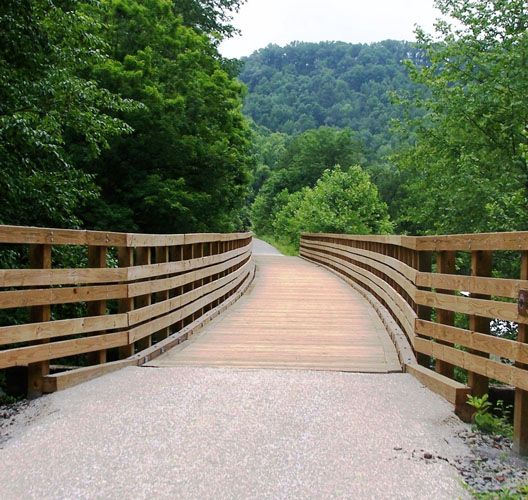 The name of the trail was derived from the Dawkins Lumber Company, which incorporated the Big Sandy and Kentucky River Railroad (BS&K) to construct the railroad in 1912. This rail corridor was developed as means of transportation for company employees and for the extraction of timber from remote areas. After the stock market crash of 1929, the BS&K was dissolved and the Chesapeake and Ohio Railway (C&O) acquired the railroad's stock on September 22, 1930. After the construction of a tunnel at Carver in 1949, the rail corridor was further expanded into Breathitt County. The rail line right-of-way was owned by CSX in 2002 when it was purchased by the R.J. Corman Railroad Group. R.J. Corman decided to abandon the 36-mile rail line in November 2004. In 2006, the Kentucky General Assembly provided the initial funds necessary to convert the abandoned right-of-way into a rail trail. In 2011, the right-of-way was purchased from R.J. Corman and the project began to move forward.