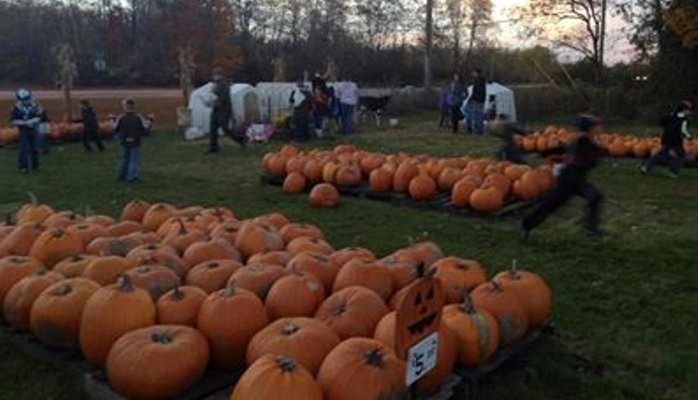 Chaos. Absolutely. Nothing seems to be organized. Kids in full or half uniforms, running around, chasing each other at times, and at other moments are trying to get to parts of the room whereby there are "things going on".

You enter the room thinking "meeting? This looks like that Discovery Zone(TM) place you took Tom ("Tommy Gun" to his friends, even though they are not old enough to know what a real "Tommy gun" looked like or its purpose) to the week before last.

All of a sudden, things started to quiet down. Someone in a Scout outfit is standing straight and tall, and without any verbalization, she is raising her hand and displaying what to you look like a peace sign from the 60s.

Boys stop moving. Adults are looking at this woman. Words are cut off in mid-sentence. Action stops. After what seems like a minute the woman speaks.

"Good evening everyone. I'm Patricia Summerall, and no I'm not a TV sports anchor", to which some of the men catching the name grins and giggles as she continued, "but I'm the Cubmaster of Pack 410. If you would please find a seat over here, and if the Cub Scouts can gather around their Den Leaders, we will get started in a short bit."

Ah. Organization. You have to remember that "peace sign thing" she did. It would resolve a lot of things around the house for sure...won't stop barking dogs, however. You find a seat and look for "Tommy Gun". He's standing over with the rest of Den 4, as they get flags to carry. He told you that he was a part of the opening ceremony -- which is why you got him a pair of Cub Scout pants to match the blue Cub Scout shirt; and a "scarf" -- a neckerchief -- and matching "holder" -- slide-- to hold the cloth in place around his neck.

With everyone seated and in their places, the monthly meeting of Pack 410 starts. Tommy and his new friends -- he had just joined last month -- are now walking, not marching, down to the center of the room where stands for the American and Pack flags are located. They turn and stand, while everyone else is prompted to stand by his Den Leader, a man not too much taller than several of the boys in the Den. He asks everyone present to join him if they are able in the Pledge.

You panicked for a short bit -- you haven't said the Pledge since, well, your school days a couple of decades back. As you recall the words, you wonder why doesn't the school do this today. You were at a meeting of the PTA and they didn't start with the Pledge...even though there was a flag in the room.

The Den Leader thanks you and that was the signal for Jon, one of Tommy's friends and whose parents encouraged you to place your son in Cub Scouts, to come up.  He raised his hand in the Cub Scout sign -- that same "be quiet!" sign that the woman -- the Cubmaster -- earlier gave and he repeated an Oath. Some of the Scouts participated and others were tripping through the words as they did their best. You feel a little uncomfortable in hearing them try to stay in unison but they finally finished up. The Den Leader asked for you to please sit down while Tommy and his Cub Scout friends placed the flags into their holders and then walked over to their seats.

The next three minutes were of introductions of various leaders -- and a welcome to a young man who looked like he just got out of college. He did a few months back and he's now some kind of executive for the Boy Scouts. He waved his hand while standing and then sitting back down.  Patricia -- Pat -- then explained what a Pack meeting is all about.

"You saw a lot of movement when you arrived, and that's actually part of the meeting. You'll see a lot more this evening. We only meet as a Pack once a month," she explained pausing to say "Bless you!" to a little girl who sneezed, "and so we try to make it meaningful and fun for everyone. We will be going out back later to do some things with pumpkins, keeping our theme for this month in mind."

A tall man wearing a bloodied shirt and a dark cape ran up to the front of the room and after he has tossed his cape around a couple of times announced "I am....Count Packula! I have come to drain your..." and then he looked at a cue card and then looked at the Cub Scouts, some laughing and others appeared to be scared and corrected himself "the wrong card. Sorry." Then he paused and stated, "I'm here to remind you of the Haunted Cub House next week. Your Den Leaders will give you the ghouly information but...be there or be square!" He then looked at the card he had in his hand and said "Sorry...Igor made the notes. I am just supposed to read them!" Then he ran back out to the back of the room and said "Be there and be scared!!" Someone played the first 10 seconds of Michael Jackson's "Thriller!" and he was gone.

"Cute!", you said to yourself.

Pat then gave out a set of awards -- starting with the Tigers, then each Den in return. As most of the boys are new like Tommy, there were very few awards. Then Pat announced the names of the new members of the Pack...and for their parents as well to come forward to the front of the room.

You got up out of your seat and joined your son. Pat explained that the first rank in Cub Scouting is called the Bobcat, and that is what your son will receive this evening. She gave each boy a card with a patch stapled and a pin attached.  After she gave the cards out, Pat asked each boy to please take the pin off the card and attach it to their parent and thank them for allowing him to be a part of Cub Scouting with us.

You son takes the pin from the card and places the card in his pants pocket. He then looks at you as you are looking around at other parents being pinned and he said quietly "I'm having a ball, Mom. Thanks for signing me up!! You're the best mom in the world!" as he pins the small metal badge to your shirt collar. You can't hold in the leakage from your eyes as you hugged your new Bobcat. You hear the applause from the other parents and Cub Scouts while your silly 8-year-old son gives a bow to the audience before he goes back to join his den and you go back to your seats with the other parents, trying to also find a Kleenex from your purse.

There were other awards given out, and Pat moved things along well. Finally, she said, "The formal part of the Pack meeting is over; please join us out back for the activity this month...we have coffee, cake, and punch there for you to enjoy also... Thanks for coming...good night Cub Scouts!"

At that point, someone led the entire group in a song called "Good Night Cub Scouts!" You didn't know the words, but then on the screen behind Pat the words magically appeared and you joined along with singing.

As parents got up and found their sons, you got up and at first, wanted to find your son...but you made a beeline for the large woman leading the Pack.

"Hey...I'm Tommy's mom and I just wanted to say thank you for all of this. I had fun...seriously, I had fun. More importantly, my son is making friends from other schools and having fun too. That's all I wanted to say..." you spoke, extending your hand out. Pat asked "if you don't mind, I'll just take a hug..." and the two of you hugged for a couple of seconds.

As you stood outside watching your son draw and then with lots of supervision cut, empty, and carve part of a jack-o-lantern they are going to donate to the Memories Forever senior citizens center as a "service project", you continue to think about how great of a thing this Cub Scout gig is. You've spent some money -- dues, fees, uniform, and book -- but this is a good "return on the investment."

And it is a family thing. And something you want to do next month with your son.