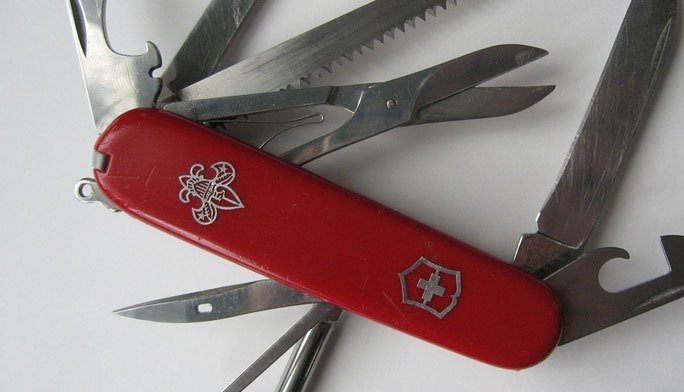 Our pioneers had one (well, kinda...didn't really fit into a pocket, but the concept was the same). Rambo had one, and so did similar characters portrayed by Steven Segall, Arnold (do I have to type his last name *smiling*?), and several others. Harrison Ford had a version of one in a couple of his movies.

My personal hero, Angus MacGyver, not only had one but during the first four seasons of the television show carrying his name, found a usage for his (or someone else's) pocket "multi-tool" each week. Gerber and the Swiss Army folks (Victorinox) all went into high gear. I bought four of those bad boys -- all didn'twhich later were stripped from me by the Transportation Security Administration while going through the security screenings at various airports.

I read a posting a while back talking about carrying a pocket knife was "manly" and that women don't carry one because of its bulk...that's complete "bs, and I made mention of that fact in the comments of that posting.   My mother carried my old Cub Scout pocket knife until she lost it and wanted me to buy her another one because "only Scouts can buy them, right?" I did buy her another Cub Scout pocket knife, but she got very little usage out of it before she passed away, having no further need for such a multiple-usage pocket tool. They give them away in Heaven...

My Sweetie (and the wife before her) carries a pocket knife in their purses.  Like me, they find them very useful and utilitarian.  I found a website which encourages women -- to make their own "multi-tool" item as compact as, well, a tube of lipstick:  http://www.instructables.com/id/Pocket-Multi-Tool-for-Women/#step2

So why did MacGyver (or "Mac") used a Boy Scout's tool to create or disarm explosives, build traps, create stink bombs, build shelters, repair cars and trucks, and in short -- save the day -- so much? It was not "product placement" as his red pocket knife did not display the Swiss Army nor BSA logos.  It was a "tip of the hat," demonstrating that resourcefulness rooted from his days as a Boy Scout.  Really.

The guy who played "MacGvyer," actor/director Richard Dean Anderson, is a former Boy Scout from Minnesota in real life. Only making it to Life Scout (the rank before Eagle), Anderson was a member of a Boy Scout Troop in Roseville, Minnesota (a suburb of Minneapolis).  When he was 17, he took off on a bicycling road trip to Alaska, traveling the last month or so solo. He told the Minneapolis Star-Tribune that he used a lot of what he learned as a Boy Scout to help him achieve that travel goal. He told a television interviewer later that as the MacGyver character was being developed, that he insisted the character relied on the things he experienced as a former intel agent as well as was taught in school and from Scouting to help "bail him out."  No guns.  He would not carry one and would only fire one at objects -- never at people.

The typical "multi-tool," as illustrated above (and which Anderson's character carried), not only consists of a large and small blade and perhaps a bottle and can opener, but also other useful items. A pair of scissors. A toothpick. Pair of tweezers. A saw, awl, and in some models a Phillips-head screwdriver end. All designed to get a person "out of a tight spot" and perhaps to safety.

There was a rumor circulating some in the Scouting community that the BSA is or was "discontinuing sales of pocket knives" because of fears that young men will want to use them as weapons instead of tools. That rumor is false. Pocket knives of various styles will continue to carry the BSA's seal or logo and will continue to be sold through their retail stores and their online catalog.  Instruction on how to safely use and care for those tools continue to be published in various Scouting handbooks and guides. The craft is still taught to adults during volunteer training sessions so they may coach youth to do the same to other youth in their units.

We in Scouting teach young men -- and women -- about how to safely carry, use and take care of a pocket knife. We start this education early -- at age eight or nine -- and build upon this education as the young man starts his first outdoor experiences as a Boy Scout.  Young men and women in our Venturing programs are coached as to how to use outdoor tools also.