One of the easiest ways to make your camping trips easier is to eat meals that don’t require any cookware, preparation, or clean-up. Let’s talk about stick cooking. With only your simple provisions and a rod of wood, you can make a tasty snack or meal. Stick cooking isn’t just enjoyable for outdoor backyard cooking either but makes for a fun time when you have your Scouts sitting around the campfire after a hard day in the woods and they’re ready to eat. We’ve all probably cooked marshmallows over a fire before but there are lots of different foods that can be cooked on a stick over the fire. Here are some good ideas for you and your troops to try and have fun while you’re cooking.

While your fire gets going, search for your cooking stick. It’s the only cooking utensil you’ll be using, so make it a good one. Find a stick that is long enough to enable you to sit far enough from the fire to not be scorched as you cook, and sturdy enough that your stick won’t droop and release your food into the flames. Greenwood sticks generally work best, as they’re less likely to catch fire and burn through. After you choose your stick, whittle off the bark on the end so you have a nice, smooth, clean area and a sharp tip with which to poke into your food as it cooks. 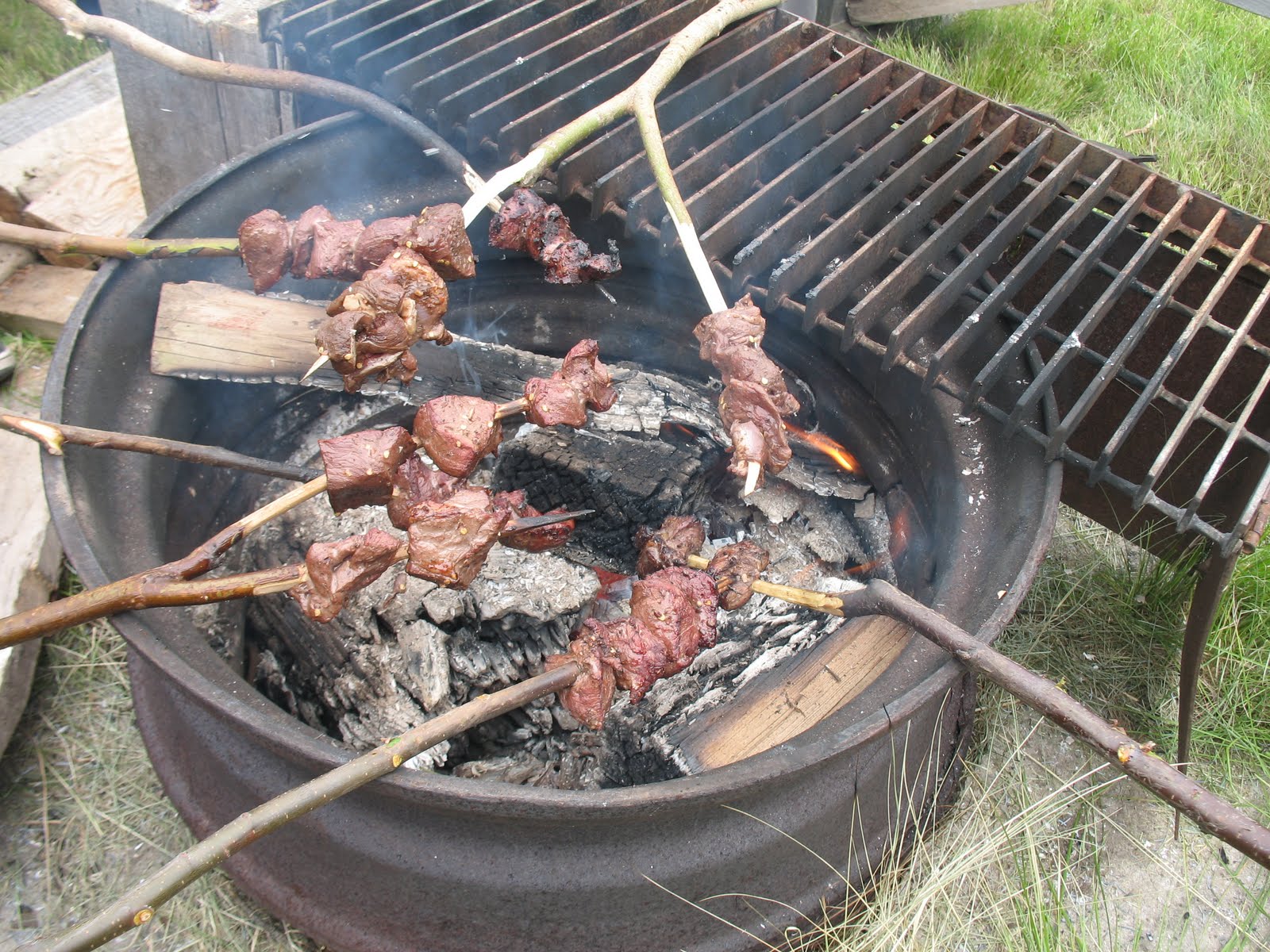 Let’s start with everyone’s favorite campfire stick food, the hot dog. Hot dogs are easy for almost anyone to cook. They are hard to burn and usually don’t catch on fire like some foods can. Just stick your stick through the center of the hot dog and begin roasting. For a different twist on this try wrapping your hot dog with crescent dough to make pigs-in-the-blanket. 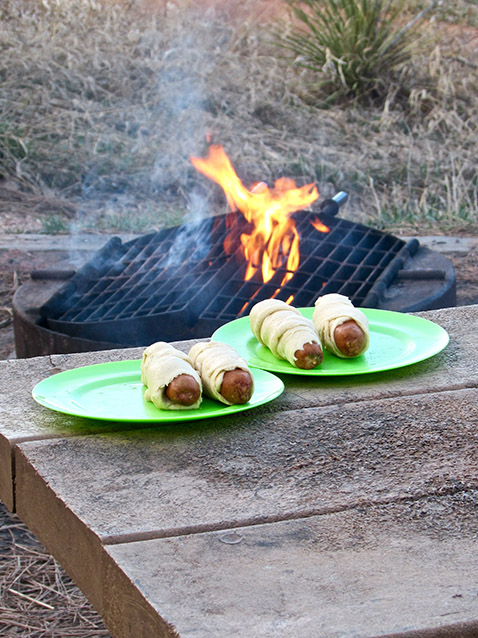 Just wrap a piece around a stick (if the stick has a couple nubs for traction, all the better), and hold it over the fire. Bacon burns and chars easily, so while you may be in a hurry to get that delicious strip in your mouth, take it slow. 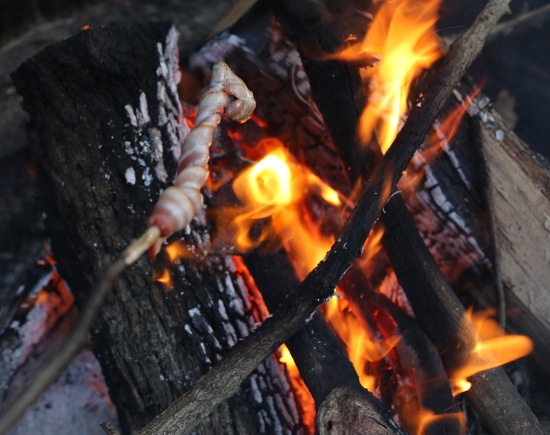 You’ll need a special stick for this stick cooking, one with a fork on the end. The fork must be wide enough and long enough to be able to securely balance a piece of bread. Put together the traditional grilled cheese sandwich by buttering two slices of bread and sticking two slices of cheese between them. Then rest your grilled cheese on top of the fork. Toast the sandwich. When the bottom slice is brown, carefully flip over the sandwich and toast the other side. Take it slow, or you’ll toast the bread before the cheese has melted. 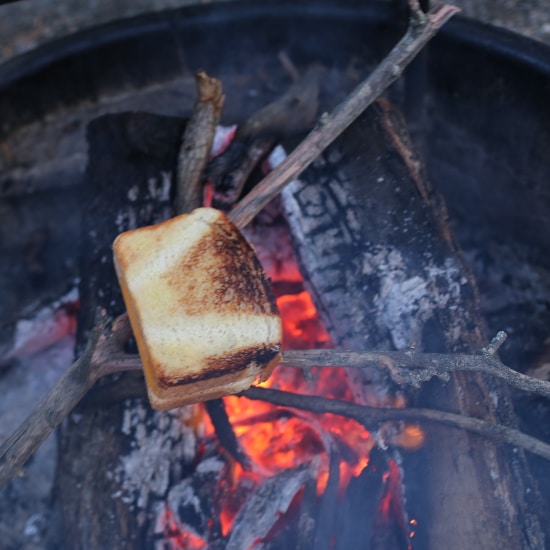 That’s right, we said eggs. Maybe if you have some expert skills, you can poke a stick through an egg directly, but that’s not what we’re suggesting. Our suggestion is to use an orange peel kind of like a basket. Skewer the peel at the top and crack an egg into your orange basket to roast over the fire.

That fluffy blob of sugar, the marshmallow, joins the hot dog on most lists of best foods to cook on a stick over a fire. The rise of the s’more seems to have cemented the marshmallow in that position. To cook a marshmallow properly — golden brown and slightly crisp on the outside, hot and gooey on the inside — look for a little “cave” of coals within your fire and place your marshmallow over it.

Slide an alternating selection of chunks of meat and vegetables onto a stick and you have an entire meal cooking over the fire. Onions, cherry tomatoes, peppers, squash and mushrooms are prime choices for the vegetable side of the meal. The most important thing in kabob cooking is to have all your cuts of both vegetables and meats sized for that they all cook thoroughly in the same amount of time. 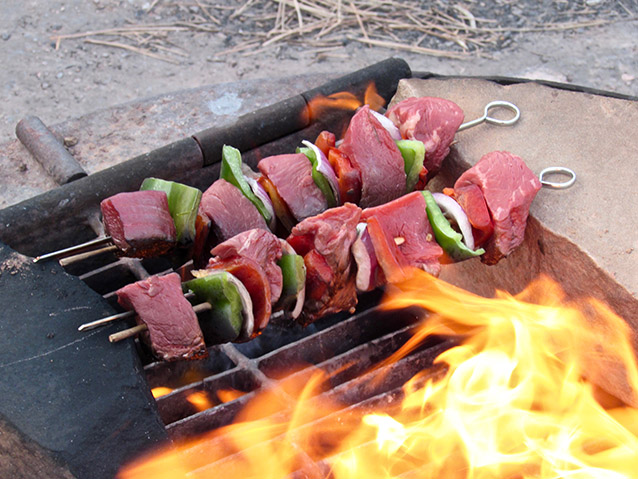 If you’ve never had grilled pineapple, you haven’t seen pineapple at its best. For a similar, and equally, delicious effect, try roasting some pineapple over your next campfire. Most fruits can be roasted over a campfire with a stick and they taste really good! 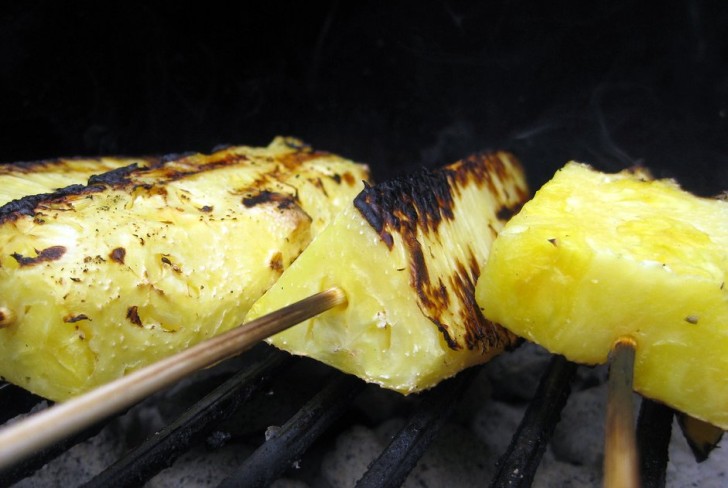 This is one we have yet to try, but there were all kinds of people on the internet that said it was really great. The starburst should develop an almost-crunchy exterior while offering a soft and sweet center. Make sure the inside of the candy has cooled down so that you don’t burn anyone’s mouth on this sweet treat. 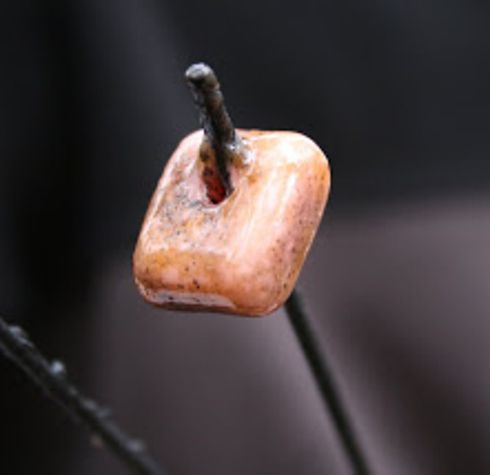 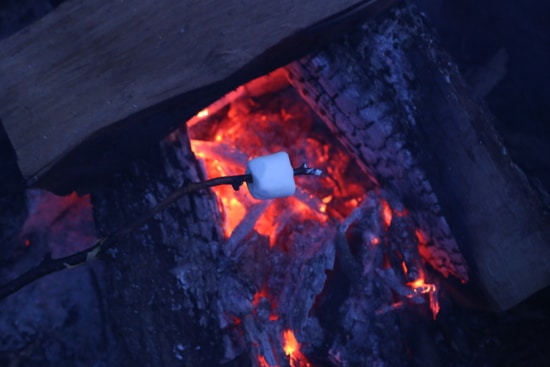