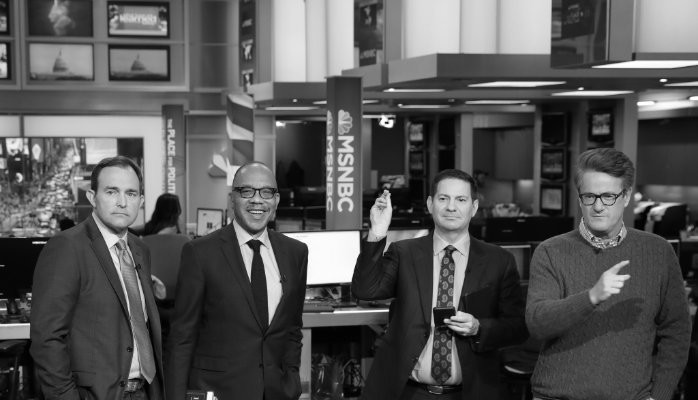 My television set is NOT broke on the Cable News Network (CNN) 24/7.  Other networks -- ABC, CBS, FOX, NBC, and PBS -- all have fine public affairs and journalistic review shows (what I refer to collectively as "talking heads" shows), and I watch them as often as I do the "Network of Record," the "Best network in the Universe -- CNN."  My Sundays are spent in part watching or listening to "live" or prerecorded versions of the five major "talking heads shows."  My morning routine includes watching the live first two hours of "Morning Joe" (they reshow major parts of the first hours during their second two hours of their four-hour block so that you know) before I leave to exercise or to work.

I do not own stock in Microsoft (TM) nor NBC/Universal (TM).

Scott Despres, a volunteer Scouter, wrote as part of a discussion on LinkedIn(TM) concerning the Eagle Scout Board of Review discussion process:  "There are many questions that an Eagle candidate could answer incorrectly to  Some for example:

I see you had 30 hours on your project, and your dad had 60. "Yeah, my dad pretty much did a lot because he said I wasn't doing it right. I didn't really care. I just wanted it done".

You have the 21 merit badges. Which one did you really like? "I kinda liked sailing, but we had thunderstorms for two days, and they wouldn't let us in the water, so those days were just talking about whatever and we got the badge anyway, so yeah, that was fun; cause it was easy."

Did you register to vote? "No, I only turned 18 two months ago, and all politicians are crooks anyway, so I'll probably never vote."

So the 12th point of the Scout Law is Reverent.  What does being reverent mean to you?  "I don't go to church. My mom sometimes does but for my dad and me, never do because it's boring."

Ok, but what does being reverent mean to you?  "I think it means that you should go to church and pray a lot."

Does your troop have a Chaplains' Aide? "One of the Dads used to make us do a prayer for closing, but he quit a couple of years ago."

Ok, but the Chaplains' Aide is a youth in your troop. Do you have a boy who does that kind of stuff? "I think we did, but no one liked him, so he stopped doing it."

Do you think I made that stuff up? Not every boy who manages to earn 21 merit badges, fills out a project book, and shows up for an Eagle Board of Review (EBOR) should be an Eagle (And I'm not an Eagle Scout for the record, but it means something to me anyway). What's the point in doing them (boards of review) if they don't mean anything? Especially if it means nothing to the Scout.

I responded to Scott and the group:

Scott wrote and provided a list of responses that he's overheard Eagle candidates respond with during their Eagle Board of Review. He stated that these are responses "an Eagle candidate could answer incorrectly to..."

Each morning, during the last two minutes of the "Morning Joe" show on MSNBC (and the "New Day" show on CNN is trying to do something similar), the hosts ask their regular co-hosts and guests, "What did we learn, if anything, today?" Then, the guests and co-hosts spend that time reflecting on something they learned or observed during the show -- or admit that the morning has been basically lost on them (and audience members like myself likewise agree although they can't hear our answers). I view an Eagle Board of Review is about the same vein as those shows.

We are treated to answers, to which the Board members craft questions, and most of the time, they are not designed to reveal any information, but to get that "generated answer," which is typically on the card or piece of paper. When a Scout answers the question as he SHOULD, with as much honesty and reflection as he could muster, then the adult gets all out of sorts with "you wanna try that answer again?" or think as Scott thinks, "that's not a correct answer..."

SURE IT IS!! It's the SCOUT'S ANSWER!

We should let the Scout tell us "what, if anything, did they learn from the Scouting experience" and listen to him explain his answer to us. Okay, if he did not learn anything, then why does he feel he should be an Eagle Scout? Talk with us about your thinking process. Convince us. The badges and the time you spent as a Scout do not count if you feel that they are worthless - are they worthless, or did you spend as little time as possible on them because you just wanted to "get it over with?"

Five years ago, next month, I sat in on an Eagle Board of Review, and after all of the members of that board asked their generic questions, and he answered in the generic positive responses, I asked three of my own. I finished it with this one: "David, if I was to tell you that we recorded this entire Board of Review and I'll show a copy of this to your parents, would you have any objections to it -- and if not, why not. And is there anything you want to say to your parents?"

The Scout looked around, possibly to see if he could see if any cameras were in the room. Some of the board members did the same. Then he looked at me and said this (I was so proud of this kid...I could have gotten out of my chair and hugged him right then and there):

"You don't know me, but the rest of these people do. They know that I have done my best. I may not have gotten all of the badge stuff done the right way; I learned from being a poor leader to being a good one over time. I don't put Scouting first, and I sometimes ignore some of my chores all of the time. But Mom, Dad, I did my best in Scouts. I hope you are proud of me because I'm proud of you for putting me in Scouts. That's all I have to say."

I assured him (and everyone else) that there's no cameras or recording instruments in the room, and I thanked him for his honesty.

What did I learn from that experience? Simple.  Allow a Scout to reflect upon his Scouting experience, asking him questions which take him "off a script" and allows him to answer the question and provide feedback -- and a Scout will share with you the good and bad things about being a Boy Scout, member of a Troop and Patrol, working with adults and members of the community, and how he matches up the "3 and 12" (Scout Oath/Promise and Law) with his personal life.

"What has the Scout learned and experienced, if anything, during this period of time -- and why."

[the photo above featured three of the "regulars" along with former U.S. Congressman Joe Scarsbourgh (far right), the co-host of the show.  The other three are (from left to right:) Brian Sullivan, Eugene Robinson, and Mark Halapin. The show is broadcasted live on cable MSNBC from 6-9 Eastern Time]