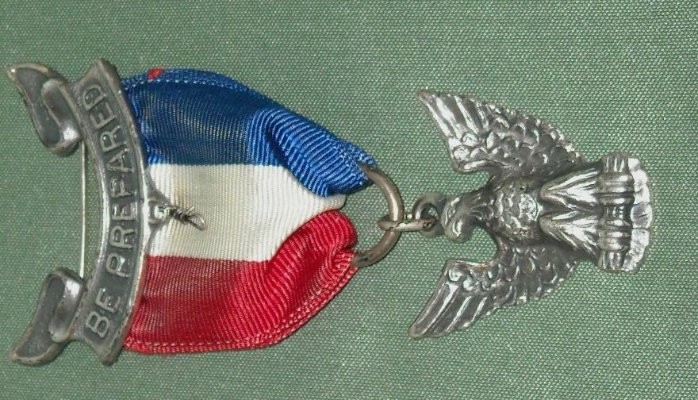 Those of you in business have heard of the "virtues" of the Eagle Scout. It's legendary.  People have told you -- if they have not already -- that Eagle Scouts can almost walk on water; can repair or "jerry rig" anything to make it work;  knows how to find their way out of the woods, a paper bag, a balloon, and an alley. He knows how to use a hatchet, read a map, write, how to talk with people -- even those he doesn't like -- and how to create useful things from seemingly "pieces of crap."   Eagle Scouts can cook entire meals, set a decent table, and know how to serve items. He has a faith -- in Something or Someone more powerful or important than he -- and doesn't push that faith onto anyone but uses his personal example to illustrate his strength in that faith; takes or attempts to take care of those who cannot take care of themselves; is not a "patsy", a "fool" nor "gullible".  He is loyal to those who deserve loyalty from him, respectful but cautious.  He is John Wayne, Angus MacGyver, and John McCain all rolled up into a body which may not look like any of those people.

"Eagle" is a title -- someone suggested that it's like the title given to those who graduate from the Basic course in Virginia or California:  Marine. When you call someone a "Marine" no matter what they look like now, you can envision that lean, trim man or woman with the Drew Carey flattop.  Or the Clint Eastwood stare. You don't mess with them, but rather you have a respect for them.

Likewise, when you call someone an "Eagle" (with or without the additional "Scout" word), you know what you're looking at...a man ready to do any number of things, with a skill set (maybe rusty but it's still in his memories) and not afraid to tell you to get out of the way and let him do his thing.

A current discussion on Facebook's Eagle Scout forum -- it's called "Eagle Scouts -- Once an Eagle, Always an Eagle" - generated the following question:
"...does it help anyone after adulthood?"

A lot of good-intentioned parents (and Eagle Scouts themselves) used the Eagle Scout Award -- the medal shown above; the certificate, wallet card and cloth badge -- as "keys" toward getting into post-secondary education, advanced rank in the military, or getting their size 10s or 12s into the door at some business somewhere.  Some have used it to snag a girlfriend or two or three because Mom and Dad would let Lucy go out with the Eagle Scout Charles but not the unkempt Linus or the brainiac Schroeder.  Even though Linus worked in a job which kept him messy but relatively richer; and Schroeder has a fellowship at age 17 at Julliard.  But be it as it may, that's what happens.   The question posed by Christopher is a good one... here are some answers but it comes down to one line:

It's what YOU choose to do with it...

I know of Eagle Scouts who placed that fact onto their resumes and almost immediately got phone calls from employers wanting their skill sets.  I do not believe that if he did not have the skill set -- and made mention that he projects those qualities that many employers are looking for in their junior and mid-level managers, that he would not get "call backs" let alone interviews.

There have been Eagle Scouts who used nothing more than their Eagle Scout card to get a small business loan. With that, they started their own tee-shirt or sub sandwich, or coffee shop.  That card told that banker that they could be trusted with money; their money; and would do their best to be good citizens of quality character in their town, something that is of high demand.

I know of an Eagle Scout -- who went and used his Eagle Scout card to convince a producer to give him 10 hours of studio time.  With that time, he cut two records and while the songs did not get to the "top 40", it was appealing enough to be aired frequently on the local soul and R&B station. Yes, he made some money, enough to pay the producer for the time and still had money left over.

For all of those "positive stories" -- and there's a lot of them out there, Christopher -- there are also stories of Eagle Scouts who have shot people. Raped teenagers.  Stole money from people and firms. Beat people.  And there are others like Charles Manson who did a lot more than that.  I heard at a Scout dinner a while back that being an Eagle Scout equated to having a largely invisible target on your back all of the time. You can't see it, the man said, but other people can.  Some will use it as a beacon -- like one of those "superheroes" signals and will reach out to you.   Others will use it as a target and do everything they can to hurt you behind your back because they are too chicken to do it in your face.

"Ah the life of an Eagle Scout," the man commented.  "A marked man indeed.  And we marked him."

I personally choose to wear and display those things to remind people of the fact that out of millions of people living in these United States, I'm part of that very small combination of outdoorsman, tech engineer, and socially conscious...with a bit of faith, fatherhood, love, and compassion tossed in for good measure.  I'm an Eagle Scout.

I choose to use my badge for good. I choose to maintain those ideals in the Scout Oath/Promise and Law, the Motto and the Slogan.  That Christopher is what you may choose to do with your Eagle now that you're out of college.  Find a need, use your resources and share the adventure.

I hope I answered your question.