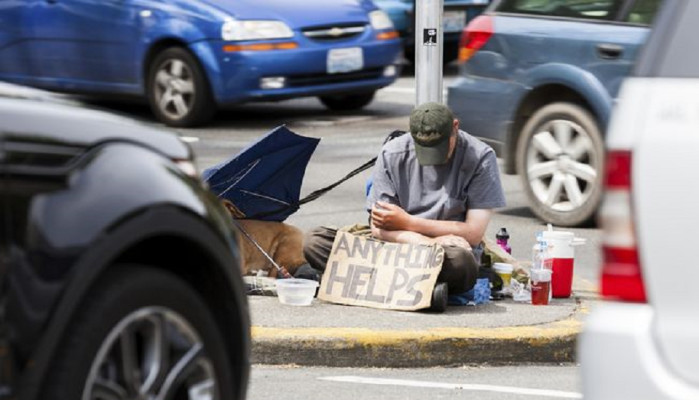 Perhaps it made me feel good.  Perhaps it is the idea of being around other like-minded people.  Maybe it is the idea of humbling one's self to serve people you don't even know, seeing their faces say to you "thank you," especially after a day in which people's faces were saying anything but those words to you.

Maybe it was the fact that with the loss of two paychecks, I would be among those I was now helping, even if it was once a month and a gesture.

I was too old to do it for a badge nor for "service hours" toward something.

My social life has been whittled down to three women with something in common: their desire to give back to their community through their church.

Growing up the way I did, I did not see my first person holding a sign panhandling for funds to feed his family and him -- not right off – not for many years.  It never crossed my mind. On my way to the '73 National Scout Jamboree, however, I saw a man holding a sign asking for money.  I attempted to take a photo of him, but the Greyhound was going too fast.

Where was I all this time, you may ask?

Remember where and how I grew up.  I lived on a series of Army bases. I am the son of a beautician, and an Army enlisted truck master, later drill instructor, and finally transportation chief in charge of an $18M fleet of trucks, buses, and cars which were working six days a week, 350 days a year.  I did not know what a food stamp was until I went to college and started to work as a BSA Paraprofessional (different story, different week and it's in a book I wrote somewhere).  I lived in Germany for much of my "growing up stage," whereby one did not see "panhandlers" (and for the life of me, I could not understand why women were dressed in skimpy clothing in the wintery weather hanging out on curbs of the streets of downtown Stuttgart or Ludwigsburg.  One of my friends explained why to me in middle school back in the States, many years later).

The concept of "going hungry" to me was laziness: you got off your butt, you went to the kitchen, and you fixed yourself (and a sibling if he's hanging around) something to eat.  Later, I learned that if I wanted a cup of coffee and a slice of pie, I'd better work somewhere for it and save a little so when the paycheck was not as full as it needed to be, that one can move the money from the savings to the checking and get some coffee and pie (and gasoline to get you there and back).

Betty, Summer, and Liz (I called her "Libbie" back then so as not to confuse her with others I knew with similar names (Betty, Ellie, Elizabeth, Beth, Betsy) all participated with their church community in feeding the down and out in the Minneapolis area once a month.  They would purchase their share of items, bring them to the shelter's kitchen and prepare or assist in preparing the meals which would be consumed by a hundred or so hungry men and women as part of the shelter's services.  This was not punishment -- they did this for free. Each of them "corralled me" into coming along with them. It was mainly to see how I would interact with their friends, and their friends can ask me questions that I would give "better answers" to instead of the "canned, practiced answers" they would get when directly asking me the same things.

Validation as to who I am and why was I interested in them.

Jim (a fellow Army veteran) and I would man the sinks and bust suds after the dirty dishes were collected and dumped into the hot water.  He would ask me questions about my childhood -- some of the same questions asked by some of the women when they were alone with me.   I would answer them the same way -- and we would continue on with our cleaning.  He would ask me how come "your lady," and you haven't gotten married yet.  I shake my head and say "she's got a ring -- a couple of them actually.  When she's ready, and the U.S. Army (which we agreed it really stood for "Uncle Sam Ain't Released Me Yet!") will let go of me, it'll happen.  Maybe."

Ester and I would clear and wipe down tables as the residents moved toward the area to find out if they were going to have a resting place there or back out on the streets.  She constantly asked me "you and she (pointing her cloth over at the tall, stocky woman gathering food items to take to the kitchen area, Summer) gonna get married?  You know that little girl of hers needs a man in her life".  I responded the same way every time:  "She's not interested in marrying me -- I think I'm taken.  The little girl has a man in her life -- her daddy --, but unfortunately, he's many states away and many minds from thinking about her.  I'm here to remind her that not every man her momma sees is someone like him.  We come in different flavors as well as colors...."  Ester would always wave her hand up in the air like "whatever" and I would smile and go back to bussing the tables with her.

Betty's "informant" was the person standing beside me as we served the prepared food of the evening. Food prep started about 6 or so, and the meal actually started at 7:45 pm at the shelter.  The instructions call for one scoop of veggies on a plate to make it last for 150 hungry souls. Gary was Betty's "sex mate" (said only because this is a "PG forum" *smiling*).  He always wants to know my "true intentions" with Betty.

"True intentions?  I am just happy to know someone I can go to Perkins with and talk about writing and the writing process without boring each other -- or others -- to tears", I told him honestly.  Betty didn't have any "designs" on me -- she was too interested in knowing how my latest work project was working out or which character I liked best and why.  "Besides, " I would tell Gary, "she's got you...you should marry the woman..."  He always answers the same way: "maybe I will..."

When I was younger, my church youth group had us spend the night in cardboard boxes to experience a bit of being homeless.  When I was older as I mentioned earlier, my expansive family included those who depended upon food stamps for their meals.  A bit older, and my family and I lived for a month and three days with no electricity which meant cans of Sterno to heat water.   As I got older, I shared those experiences with my children, but I didn't have to go very long and hard with those lessons as they already knew families working through similar situations as we did.  I became a homeless advocate when we moved to Minnesota as part of the Alpha Phi Omega college chapter at the "U."

As I would end workshops about 20 years back with an image like the one above, I would say simply "Every one of us in this room is two paychecks away from being like this person.  Desperate, hungry, embarrassed, ashamed.   Determined, willing, hopeful, encouraged.  Two paychecks. "

I would pause for about 40 seconds or so, to let the words sink in.

I would then intone those present to "stay warm, dry, of good spirits... and loved."