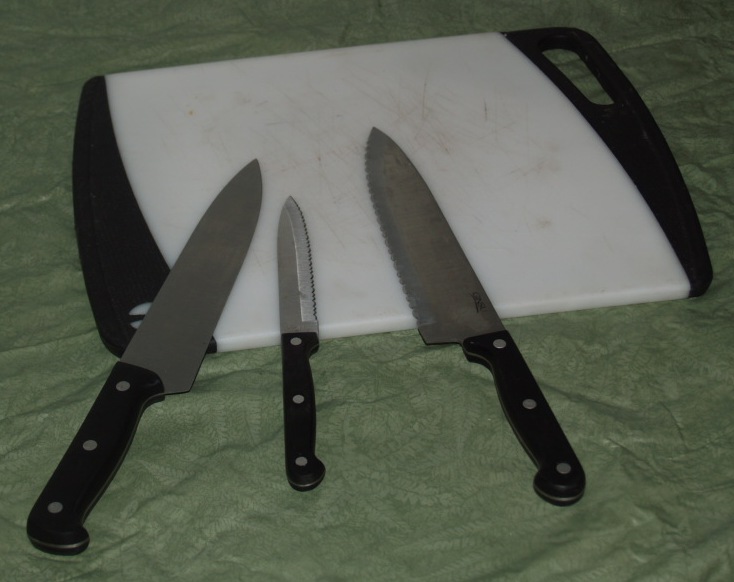 Where should I start... well as you might have guessed this section is all about knives and cutting stuff up. As I have said before... Safety First and Safety Always. The knives should always be kept clean and sharp. A dull knife is just asking for big problems and if its a dirty knife even more problems. When Scouts are using knives and other sharp objects there should be adult leaders around to, shall we say, use their hawk eyes. Mistakes will happen and kids will be kids, but be there to control it and keep risk to a minimum.

In this picture I have three knives shown. Two are serrated and one is a straight blade. Each type of knife has its own purpose. For example meat you may find the serrated better, but say a potato the straight blade maybe better. Also when it comes to size, use a knife the right size for the job and person. I find for most things I do I personally prefer to use a straight blade steak knife, even for cutting up vegetables.

When cutting, do so on an appropriate surface such as a cutting board that won't damage or nick the knife blade. If the knife is dull or damaged it needs to be flagged and stored until it can be fixed. Do not throw damaged knifes in a plastic garbage bag, the blade will just poke out and hurt someone and destroy the bag. Also know who and what is going around you. Like trying to cut up a large chunk of meat and have a football bounce off you head could be bad. I have seen people cut there finger to the bone, because they were not paying attention to what they were doing. I have also seen Scouts shake with fear just from the thought of picking up a small pairing knife to cut up a carrot. Be ready for anything.

I guess this is a good place to talk about a few kitchen safety type issues. First I define the kitchen area. Normally I do this by using my two folding tables on each side and across one end my large stove. This makes the kitchen look like a big “U”, and makes it so there is only one way in and out, this controls access. Of course if something actually happened there are many other ways in and out, just don't get lazy and set a bad example using them in a non-emergency. Another technique is to rope off the kitchen using say a colorful rope. Make sure for the adults and kids that the string is at abdominal level, anything above the nipples or below the waist is a problem. Just use common sense.

Anyone who is in the kitchen area should be there for a purpose. There should be a no playing, running, rough housing, etc rule in the kitchen area. This is not just for safety such as someone stumbling into a knife that wasn't put away or falling onto a hot stove, but also it could kick up a lot of dirt on to the tables, any food that may be out, etc – just makes keeping it clean harder. In another post we will talk about the actual cleaning process.

With that I will ask for your comments, just enter them below.